Hi, my name is Dom. I have synesthesia — I’m a synesthete.

To put the above definition into common language: I “see” letters, numbers, and words as colors — specific colors which have not changed as long as I can remember. For instance, in my mind, the letter “a” is and has always been a very pale yellow. (More on that later.)

Keep in mind that throughout much of my adult life I had no idea that synesthesia was not a common ability. I thought everyone perceived letters and numbers and whatnot to be colored. One day during a brainstorming / goofing-off session, I matter-of-factly mentioned to a friend that the word “group” was a pale blue. The look on her face was a mixture of bewilderment and alarm and worry. “What are you talking about?”

The subsequent conversation revealed that not only did she not share my experience, but that she had never heard of anyone else with my “gift,” either. (She preferred “freak.”)

So here’s what I’ve learned since then:

Primarily, I experience what’s called grapheme-color synesthesia. According to Wikipedia, it’s one of the most common forms, where individual letters and numbers (graphemes) are “shaded” or “tinged” with color. 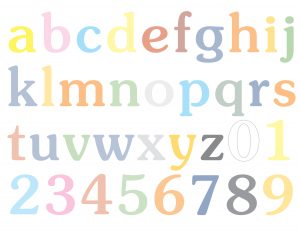 First of all, let me clarify — I perceive these colors in my head. I still see the letters and numbers as they actually are.

Secondly, this alphabet was really hard to do. Because I absolutely had to get the colors exactly right, as they appear in my noggin. Guess what? They’re not. And that bugs me.

Thirdly, I also experience other forms of synesthesia. Such as:

Chromesthesia. Sometimes, I associate sounds with colors and moving shapes. Especially at night when it’s dark and there’s less sensory input, I’ll hear a barking dog or siren and there will be a very distinctive shape and color and movement to the sound in my head.

Spatial sequence synesthesia. I see numerical sequences as points in space. Like, the numbers 11-19 are relatively close together, but the 20s are spread more apart. And 29 is farther away from 30 than 28.

Spatio-temporal synesthesia. This is cool. The days of the week and the months of the year is kind of a mental map in my head. Both the days and the months are arranged in a kind of ribbon or loop. Here’s how my week looks like. Note how the weekend takes prominence. Especially Saturday.

So yeah, maybe I am a freak. But an interesting one.

Posted in Things That Engage Us