The company that has helped define and shape the beginning of the 21st century has finally joined it.

There are some schools of thought that believe serif fonts — like the ones used in almost all of the Google logo’s previous incarnations — are warmer and friendlier. To a certain extent, perhaps that’s true, but they can also seem old-fashioned, and more about the past and maintaining the status quo than about new ideas and the future. This is fine for, say, a blue-blood law firm with blue-blood clients, but there’s always been a jolt of dissonance for me every time I saw Google’s logo. If there’s any company that is about molding the future, it’s Google.

But many, including myself, don’t believe serif fonts are necessarily friendlier (I prefer “approachable”). And Google has carefully chosen a sans serif font (I think it’s Product Sans) that is designed not only to be approachable, but scalable for mobile devices, including wearables like the Apple Watch. This was always an issue with the thicks and thins of the old logo. I’m surprised, frankly, that it took them this long to address that.

That said, aside from the font choice, by far the most recognizable element of Google’s logo has been the blue-red-yellow-blue-green-red pattern. Color can be the single most important feature of a brand. (Think Coke, Kodak and IBM.) When creating brands, we always try to choose what I call their “signature color,” and use it liberally throughout all a client’s communications.

For instance, in crafting M&F Bank’s new brand identity and logo (the previous logo had been around 25 years or so), we departed from the dated and alarmingly BB&T-like burgundy serif and designed a new navy and orange sans serif logo that enabled us to create a vibrant brand. 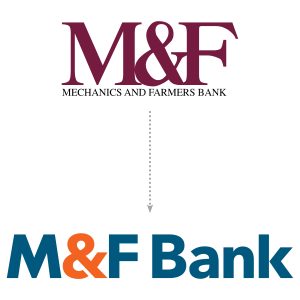 But enough about us. With Google’s new logo, not only have they embraced good, solid, functional design, but they’ve created an actual brand identity system.

If you take a look at this short video below, you’ll see that around the 1:15 mark, the trademark blue, red, yellow and green is used in their microphone icon and speech recognition patterns. More important, they’ve created a “G” icon that I suspect they’ll want to eventually use instead of the entire word.

It seems as though the initial reception in the design community is a good one, but I’m more interested how civilians react to the new world order. (In my house, Me: “Hey, Google has a new logo!” Teenager: “Noooooooo! I like the old one!”) Because while Google has entered the design world’s 21st century, many people prefer the old and familiar. Change can be tricky, even for pioneers like Google.