This is the story of how I broke up with Starbucks over a cup of cocoa.

I don’t go to Starbucks very often, but sometimes I do, usually when I am travelling and just “want a little something.” Yet I am a customer and their brand has made me a promise: that they will make my “little something” the way I like it.

I actually don’t drink coffee – I like hot chocolate. Oddly enough, I don’t really like the standard variant of Starbucks hot chocolate, but I bothered to find out how they make it, because it seemed to me that they have the ingredients to make something quite delicious if they will just follow my instructions.

Or in other words, if they make it my way. As their brand promises they will do. “Happily,” they say. They even write my name on my cup.

So here it is: see if you can follow.

A quick aside: There is always the frustrating moments of 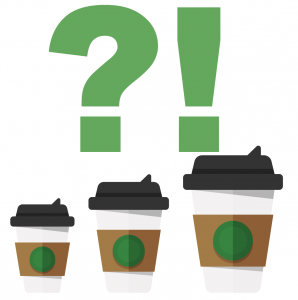 struggle as I figure out which is bigger: vente or grande. Quick: which? Remember the Who’s in Who-ville? The tall and the small? Opposites, right? In Starbucks-ville the Tall IS the Small, which is just not a good place to start. OK, Vente or Grande: which is bigger? Well, Grande sounds pretty… grand, right? But then Vente is… what exactly? Like 20 in French. So that’s big, right? But 50’s bigger and that’s… what again? Quick! Which!?! So every order starts with me feeling like a bit of an idiot.

Here is the scene: 6 a.m., the Starbucks right at the bottom of the escalator in RDU airport; 7 a.m. flight, and a half-hour line. I saw the line, calculated accurately the time it would require, and agreed to invest the time. Because I wanted my “little something,” right?

I finally get to the head of the line and gave the brightly smiling young woman my order. Her smile slipped a little with each instruction. After the fourth it was gone, replaced with a frown of concentration. The heavy cream is often a tough one.

I went to the end of the bar with the people I had become familiar with in the half-hour we all waited. I idly watched the barista make drink after drink. He was the very picture of the Starbucks barista — young, rolled pant legs and hipster boots, beanie on the back of his head with the tuft of hair fetchingly thrust out the front partially covering one eye. Wrist stuff. Tattoos. Moving fast.

I watched him make something with whipped cream and drizzled chocolate sauce, put a lid on, and then call “Rod!” Uh oh.

I went over and in a friendly, light, apologetic way, said, “Hey there wasn’t supposed to be any whipped cream on that…” He looked at me a little startled, but recovered and said, “No problem.” 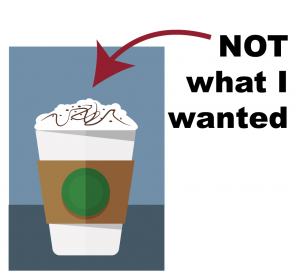 He took the drink back, uncapped it, took a big spoon, and scooped off the offending whipped cream, and then, almost without looking, he slung it with a backward flip of his wrist SPLAT into the sink behind him, replaced the lid, and pushed the drink back over to me. I was a little nonplussed, but whatever, not really a big deal. It wasn’t what I expected, but honestly if I had not seen it I probably would not have objected at all. But it did feel a little short-cut-y.

So I wandered off to my gate, waiting for that first wonderful “little something” sip till I got there, and… great God, what have they done. Vanilla: doubled; chocolate: reduced, not increased. Heavy cream: present, but cold. A lukewarm, heavily sweet, gooey, white … mess. Instantly thrown away as undrinkable.

Irritated, but now out of time to go back to the store and start all over again, I went on the Starbucks website and told the story above. Your Brand vs How I Lived It. Silence since then…

Thinking it through, I realized that this order of mine is baffling to Starbucks about 80% of the time I try it. It’s almost never right. So that was it. I’m done. We’re through, Starbucks and me. On my last trips I have walked on by…

A brand that repeatedly does not live up to its most basic promise WILL LOSE CUSTOMERS. There are too many options and not enough opportunities to “fix it.” Customers are paying attention, and they expect brands to keep the promises they repeatedly make.